In the city center, reality is relatively stable, but the further afield you get, the more it deteriorates, mutates, becomes dream-like. In Itras By you’ll find dreams which have become real, an outline of a city divided by class, sea elephants, a gentleman with a monster in his basement, the structural cancer that haunts some of the city’s buildings, and more.

Check out the first few pages of the book here 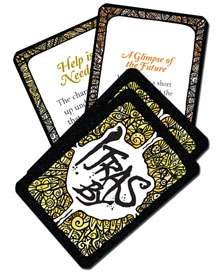 The rule system in a narrow sense is simple and takes up only a few pages. Itras By pioneered the use of Matthiijs Holter’s resolution cards (also featured in e.g. Archipelago III), and additionally features a Chance Card system. The resolution cards have texts like “Yes, but…”, “No, and…”, “Yes, and…” etc. The results are interpreted by players.

The Chance Cards can be drawn once per session by each player, and serve to infuse the game with a surrealist touch. Some examples:

Cut Scene: Jump forward three hours. Describe what conditions the characters find themselves in. You’re not allowed to describe what has happened in the meantime.

Nemesis! This card awakens the character’s Nemesis. In some way, this arch enemy affects the situation. Exactly how is up to you. The character doesn’t have an arch enemy? Well, now she does.

These cards are interpreted by the player who draws. Download the cards for more examples.

The book has advice on how to roleplay, be a gamemaster, plan a campaign, play with surrealism and more.

“This is the game I would recommend to any beginners as their first game (at least gamers that are looking for a role playing game rather than a board game), they can read the game and get the idea of how to play without having a mentor to introduce them into the hobby.”

The English edition is available at DriveThruRPG.

Martin Bull Gudmundsen (b. 1979) former psychology student and television star. He has co-authored Itras By with Ole Peder Giæver (b. 1980), who works as a journalist. They met in high-school, where they made science fiction fanzines and watched Neverwhere during recess.

The English edition of Itras By is illustrated by Thore Hansen and Kathy Schad.